An Afternoon Spent in Bath (with Waxen Austen) 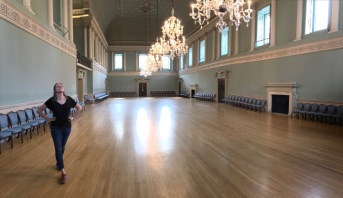 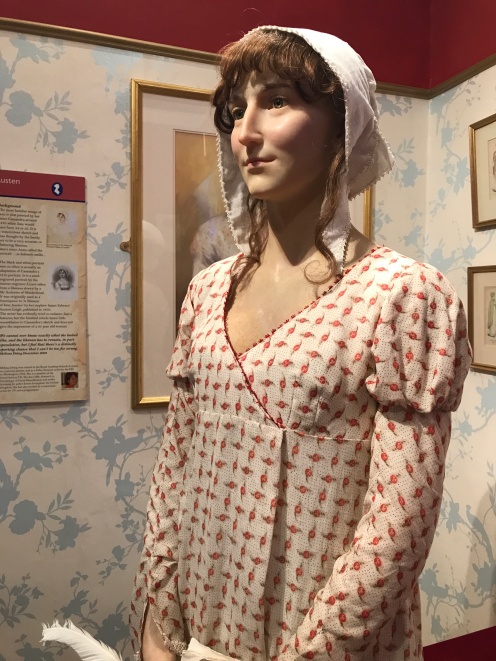 In 1801, Jane Austen (JA) and her father, mother, and sister moved to Bath. She lived in various places in Bath for five years. Although Austen supposedly was not fond of the town, she set two of her novels in Bath. Strangely enough, these novels were posthumously published, so she technically did not see one of her Bath novels in print. Bath would not have been a place of writing for JA, but rather one of socializing. Bath was a fashionable place to be, so one would hang out with friends, go to balls, the theatre, and more. Read Northanger Abbey and Persuasion to see how busy one’s social calendar could be while staying in or visiting Bath.

I decided to visit Bath over the weekend so that I could check out the Jane Austen Centre (JAC). I wanted to see if it would be a place to take students on a future travel abroad course that I aim to design. I had heard mixed reviews of the JAC–some people call it a waste of time; others deem it a fun place to go. Someone mentioned that it is the Disney version of Jane Austen. Seeing as how I like Disney, I thought that I might be OK with that. I can see how someone might find the place to be a little hokey. After all, all of the young ladies working there (seriously, only young girls get to work there) are in Regency dress. They wear name badges that match the names of Austen characters. They give tours of two rooms, all in the guise of Jane Bennet and the like. It is a bit hokey, but kind of fun.

After the tour ends with a portrait gallery of images mostly not of JA (and the guide explains that), visitors find themselves in a space that is quite informative about JA’s time in Bath. I found this part of the centre to be useful. Then, you can watch a film narrated by the BBC actor (Adrian Lukis) who played Wickam in the 1995 miniseries. After that you enter a room with a lot of stuff–costumes, objects, and the like that you can either look at and pose with, or you can try on and do the same.

Here are a few of the non-wearable items: 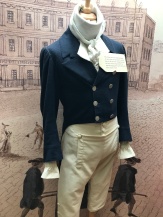 A few of the wearable items, one sported by yours truly:

By the way, all of the costumes were tiny–really meant for someone who is a size 2 (US size). Even the bonnets were small. Finally I found one that fit.  I also pretended to enter a shop to look for such items: 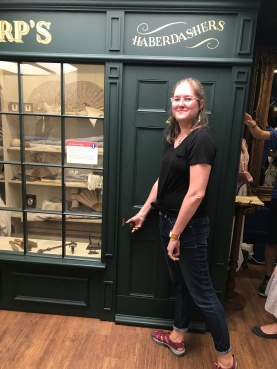 After having a go in the shop(ping) area, visitors get to dip their pens in the inkwell in a Janeish moment of writing and then see the newish waxen figure of Jane, and they can pose with it, as I did. 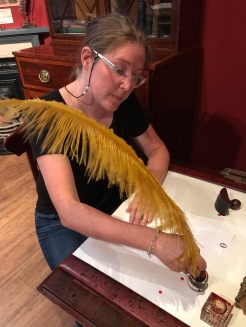 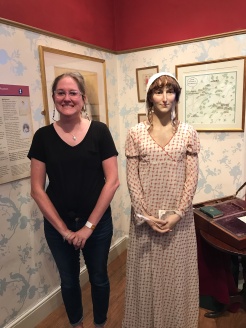 By the way, the ink stained my fingers! Believe it or not, JA and I share the same height.

I gotta admit: the wax figure is a little weird. I didn’t know what to think about that low-cut dress (when you stand by it you can see some cleavage). I also never really liked wax museums anyway. I didn’t feel like I was standing next to Austen, but it was neat nonetheless to pose with the figure.

After finishing the exhibit, which is small and takes about 30 minutes-1 hour to get through (an hour would be for slow readers and people trying on a bunch of costumes and taking a bunch of pics), visitors can pop up to the top floor for some tea and treats. Adam and I decided to do that, as we were tired and in need of some tea. 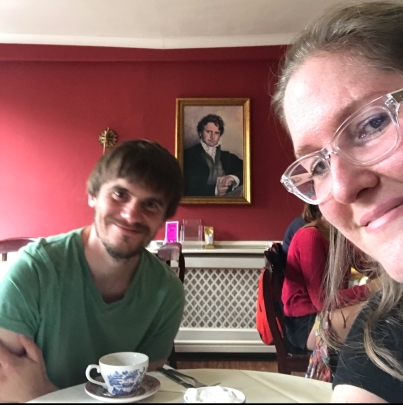 Of course, I had the Jane Austen blend. It was delish.

A trip to Bath would not be complete without a visit to the Royal Crescent, the Assembly Room, and the Pump Room, so we also visited those places.

I also had to take a picture of this sign, which hung over a shoe store:

All in all, it was a nice afternoon in Bath.

3 responses to “An Afternoon Spent in Bath (with Waxen Austen)”