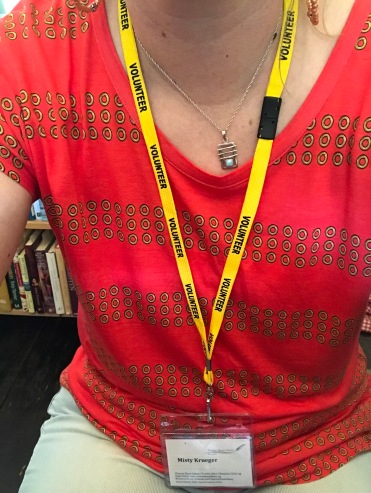 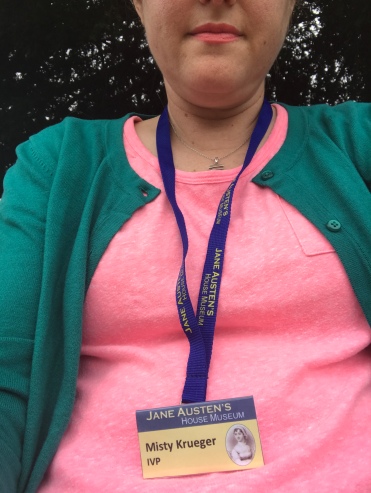 On July 10 and 11 I officially began my stewardship at Chawton House Library (CHL) and Jane Austen’s House Museum (JAHM), respectively. I volunteered on Monday at CHL and Tuesday at JAHM. See the pics above which show my badges and nifty lanyards.

On Monday I began by opening the house. This process includes opening the doors to the rooms, turning on lights, removing the covers on the display cases, pulling back the curtains, and putting away the covers. After that, I met with the librarian, Darren Bevins, to discuss what I would do that day. He asked me to sit in the Study Room (which actually contains Deirdre Le Faye’s library) and work on a future exhibit’s placards. The exhibit will showcase books for a reading group that will begin in September. The group will read books written by Eliza Haywood, Mary Brunton, Alexander Pope, Sir Walter Scott, and many more writers, including the relatively unknown author-adventurer, Mary Ann Talbot. The picture below shows CHL’s Facebook page image of the manuscript.

While I was sitting in this room working on the placards, guess who showed up! Deirdre Le Faye–fangirl moment #2 with Le Faye; remember that I met her two days prior at the AGM. It was a delight to be a fly on the wall (well, I was actually just sitting in a chair behind the computer) as she looked over her collection and chatted to herself. FWIW, that morning she was being interviewed in the Lower Reading Room.

After working on a handful of these placards, I ate my lunch in the Common Room. While I ate my lunch I realized that I was sitting at a converted billiards table. 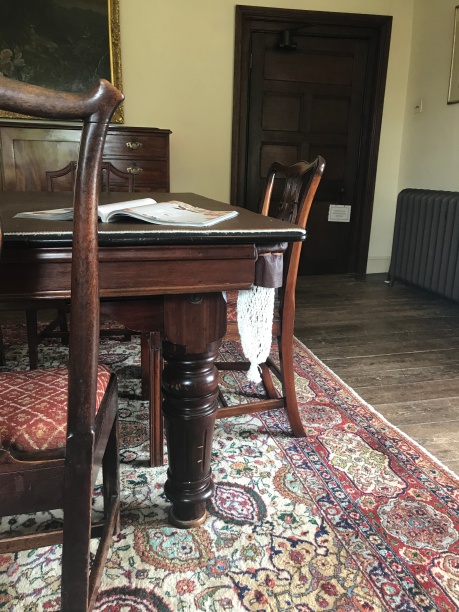 After lunch I moved from the Study Room to the Lower Reading Room. This room is kept locked at all times, for it contains valuable books from the CHL collection. It also contains some items from the current exhibit, including handwritten pages from Austen’s Sir Charles Grandison manuscript and a letter (on loan from a Texas owner, Sandra Clark) from Jane to Cassandra dated Christmas Eve (presumably 1798). 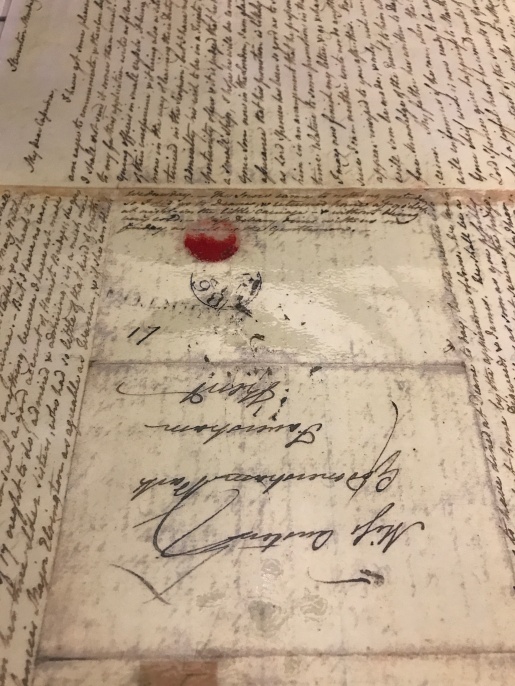 The letter is in the display case obviously to keep it out of people’s hands, but CHL made a laminated facsimile of it so that visitors can read the entire letter. Above you see an image of the page that would have doubled as the envelope. Notice the writing from edge to edge and even on the outer page itself.

As I sat in this room for a few hours, I read Cecily O’Neill’s new playbook called Young Jane and prepared my list for Tuesday afternoon’s research session (more on that in another post). I also let people into the locked room–some groups were small: a single person, a couple, a few friends. Some groups were large: a handful of people, even an entire tour group from Taiwan. I loved meeting all of the visitors. I shared information with them. I answered questions. It was great to see what it’s like from the opposite perspective of visiting a museum (even though CHL doesn’t call itself that)–to see the joy of a first look at something amazing.

To finish up my day I closed down the house by simply reversing my morning routine.

On Tuesday I began my second volunteer position, this one at JAHM. This site is particularly special, for it is the house in which Austen lived out the last years of her life. The house is referred to as a cottage–definitely in 19th-c. terms, for it is quite large with many rooms–and it is full of light, even on a cloudy, rainy day, such as this one.

To begin I met the other volunteers for the day, Sammy and Debbie, who gave me a crash course on how to be steward at the house. Like CHL, this involves turning on lights and opening shutters (no curtains here), but adds some other touches like placing fresh-cut flowers in rooms. I was asked to monitor the upstairs on Tuesday because a large German? tour group entered the house. The house can only contain 50 people at once, so with the other visitors and the tour group included, it was a tight fit.

I spent most of my morning in the Admiral’s Room–a room containing items belonging to Francis Austen. Visitors asked me questions about the bed and flooring, and I had to improvise as I answered these questions. Luckily, I answered them correctly. I could easily answer other questions such as “Where is the ring?”–which refers to Austen’s turquoise ring.

I moseyed around the house that morning and met Jeremy Knight (an Austen descendent) by accident. I also eavesdropped on many conversations, including one by some Americans who kindly argued over which day Austen died.

I really enjoy being in JAHM, for I feel close to Austen there; I get a sense of this house being a home, a lived-in place where our dear Jane conversed with friends and family, worked on a patchwork coverlet, and wrote half of her famous novels.