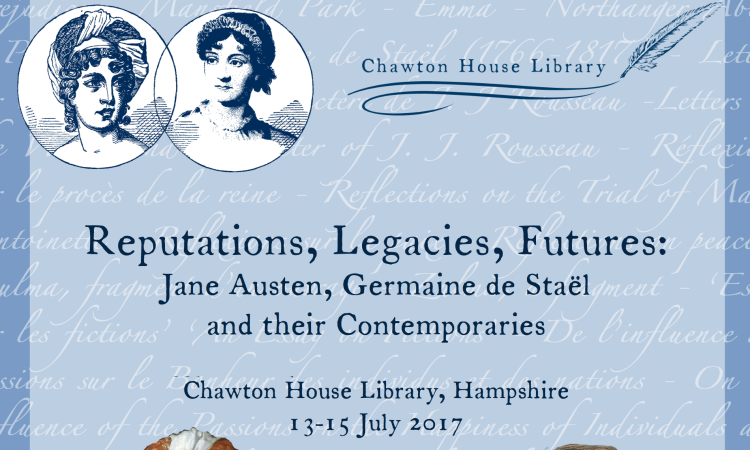 On July 14 I attended part of a conference that addressed Jane Austen, Germaine de Stael, and other women writers, such as Charlotte Lennox and Maria Edgeworth. While my reason for being at CHL is to do research, I also have found that attending talks is worth taking a research break. In some ways, attending talks is a kind of research strategy. I get to listen to great speakers talk about JA, and then I get ideas for parts of book chapters and such.

On Friday I attended two sessions. The first, “Screenplays and Adaptations,” was scheduled for 9:30 a.m., but (funny story?) the bus bringing the conference participants to CHL was about 30-40 minutes late! As it turns out one of the speakers on the panel could not attend, so while we started late, we did end on time. 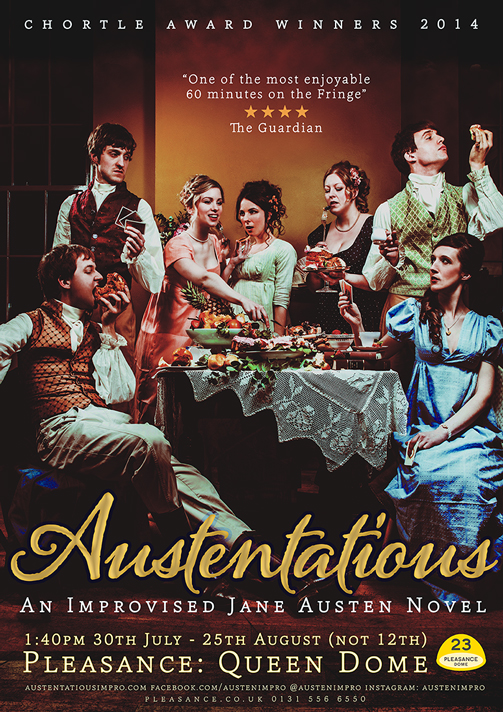 Check out this poster!

I had never heard of this program before, but let me tell you that it sounds hilarious. I love comedy improv. I used to regularly attend the Oxymorons’ show in San Antonio–and I laughed so much that my face hurt. If only I could attend the Austen show. Alas, it is now in Edinburgh. Anyhoo, I loved listening to Civale’s very smart paper and to learn that Austentatious also makes fun of Austen scholars. We deserve that, right?

The second paper was on translations of JA in Bulgaria. Another fascinating paper here. Vitana Kostadinova addressed how long it took JA to reach Bulgaria (for political reasons): around 150 years after JA’s books were first published. Kostadinova also indicated that the BBC productions of Pride and Prejudice and others were influential in raising Austen’s popularity in Bulgaria.

The speaker I actually came to hear was Cecily O’Neill. O’Neill is a playwright and dramaturg who has adapted pieces from JA’s juvenilia (my baby). 2Time Theatre has staged these productions, but sadly I missed them! Another doh moment. It was wonderful to hear O’Neill talk about the adaptation of Austen’s work, and even better to hear her perform a scene with her daughter! What delight. All smiling from yours truly. After the session I talked to O’Neill, and she is as lovely as I hoped she would be. 🙂

Shout-out to Marilyn Francus for chairing this panel. It’s almost as if I was the intended audience. FWIW, Francus is the JASNA IVP coordinator, so I have been corresponding with her for many months. I had not met her until Friday, and I am pleased to say that she is awesome–friendly, helpful, funny!

The last panel I attended was “Austen Remix.” This panel, chaired by Deidre Lynch, addressed two topics that are also near and dear to my heart: 1) keeping track of books that Austen had access to in the Knight collection and 2) monster mashups! Another FWIW: I have written two essays on the monster mashup genre and Sense and Sensibility and Sea Monsters, so when I saw that one of the papers was entitled “Zombie Jane Austen” and that its author–who actually teaches at the uni from which I earned my Masters degree, but I never got to take a class with–is someone I have quoted in my work, I had to go to this talk.

That said, let me work my way backwards through the panel. The last paper was Mary Ann O’Farrell’s zombie paper, and I was happy to hear her begin by addressing Pride and Prejudice and Zombies (the book and film) but surprised to hear her end with the show Girls. I was so fascinated that when the Q&A began, I raised my hand, popped out of my chair in the back corner of the room, and just started talking! “Is Girls a zombification of JA?” I asked. It. was. awesome. O’Farrell is an engaging speaker–what a wonderful reading style–and a great conversant in the Q&A part of the session. After the session I made sure to introduce myself to her because even though we inhabited the same halls at Texas A&M in the early 2000’s, we never actually met. What a joy to talk to her finally!

The second paper in the panel addressed a handful of thrifty editions of JA’s Pride and Prejudice published in the 1880s and 90s. Annika Bautz provided some publishing stats that showed how many copies of P&P were printed by different sellers over these two decades, and the numbers astounded the audience. I remember hearing a gasp at the 10,000 number from one of the years. Bautz also showed some of the images from these editions, and it was somewhat disconcerting to see how the Victorian era represented Lizzie Bennet as a docile, dutiful daughter. Harrumph!

The panel opened with Peter Sabor’s paper on JA’s brother’s library at one of his estates, Godmersham Park. Sabor and a group of scholars and students are putting together a digital library that will allow readers to actually feel like they are in the library, replete with the ability to pull a book off the shelf. I can’t wait to see the Digital Godmersham Park project come to fruition. Sabor even mentioned that missing books will be shelved, so to speak, in the digital library–it is his and others scholars’ hope that some of these copies are out there in the world waiting to be found. How do we know what’s missing? Someone created a catalog of the books in the library’s collection, and these are nowhere to be found in the current holdings.

After listening to six great papers, meeting new people, and saying hi to a few friends (Hi, Emily Friedman!), I scarfed down my lunch and headed over to the reading room so that I could get back to my close reading (by this I mean squinting to decipher 18th- and 19th-century handwriting). 🙂 All in all, it was another great day full of great ideas. I am thankful that a collection of great books and great minds were at my disposal that day! 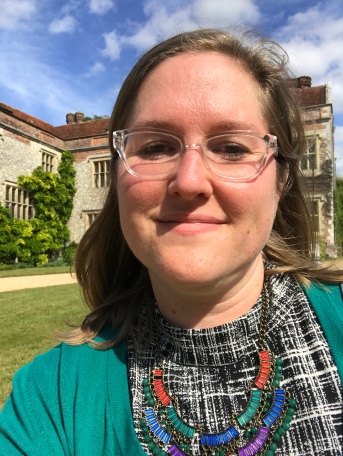