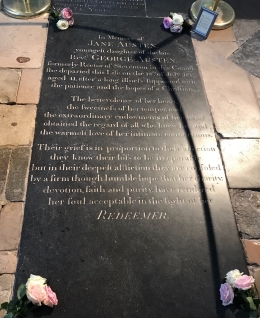 Flowers next to the grave site. Notice JASNA representing.

Last night I began my pilgrimage to Winchester. Like the pilgrims who came to Winchester Cathedral for centuries to commemorate the life of Saint Swithun, I (and many others) visited the cathedral today to honor Jane Austen, who died 200 years ago on this date, July 18. You might deem my use of the word pilgrimage a bit blasphemous, but consider me to be a woman who has traveled from the U.S.A. to England by car, bus, plane, and subway to visit the site where her favorite author lived and died.  I am a pilgrim on a journey to honor someone I esteem as a kind of a moral, spiritual guide.

This blog post is one small attempt to give a shout-out to Saint Jane. (Did I go too far now? Saint Jane??) I actually did write a note of thanks to Jane Austen today at Winchester Cathedral. I was the first to write in the book today! OMG. OMG. OMG! Were the other visitors this morning too busy taking pictures that they failed to notice this book?

By the way, I included this second image here because I failed to notice this sign until after I flipped through the book, saw everyone else write on the left side of the book, and then proceeded to follow everyone else. Was this a case of the proverbial “blind leading the blind”? Guess so.

Whatever the case, I was so pleased to share my experience of visiting Jane Austen’s grave site (which is actually inside the cathedral) with so many other devotees–including JASNA members called Pathfinders who were visiting from the U.S. (See the picture at top, right, which shows the lovely flowers donated by JASNA.) I was a proud member today of this wonderful society.

And what a day it was.

Check out the pics below for a visual rendering of most of the things I just wrote about.

The plaque and some notes on the window.

An image of the two pics above in context–oh, yeah, there I am, too!

Henry’s draft on the left, and James’ on the right.

I saw all of this in a matter of hours. Then I took a break, walked to my flat, ate lunch, and went back to the cathedral. 🙂

When I returned to the cathedral, I looked at the grave site again. Then I left again so that I could walk down to 8 College to see the place where JA passed away. 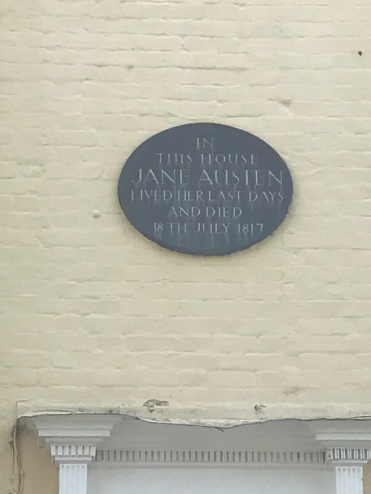 After that I saw this groovy art piece. 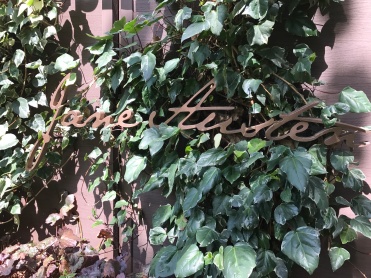 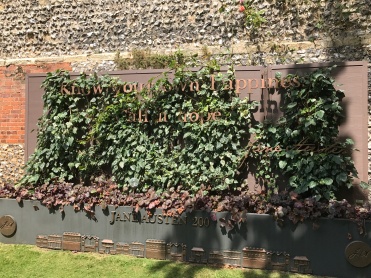 Then I went to back to the cathedral so that I could take a look at the gift shop. I didn’t buy anything today. Maybe another day? There are some really cool items in the shop, like this purse!

Then I went back in the cathedral so that I could hear the Governor of the Bank of England talk about the new Jane Austen £10 note, which was unveiled today for the first time and will be released into circulation on September 14. I learned a lot about how print money is designed and made. I learned the ins and outs, too, of the new note. Watch the video, which tells you all about it. For real, do it right now, and then come back to the blog post. 😛

I also got to hold one of the notes. No, I didn’t get to keep it.

After holding onto a new piece of pop culture I ventured around the cathedral one more time to check out the cathedral’s exhibition: “Inspired by the Word.” What a fantastic exhibit. I love the realistic renderings, such as the statues, but also the really clever and arts-and-crafty things, such as the pinned ribbon collage with all of Austen’s characters and some famous passages from the novels. 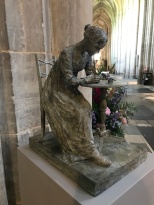 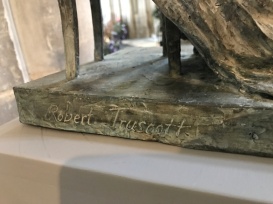 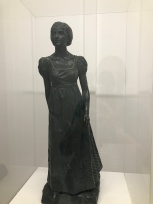 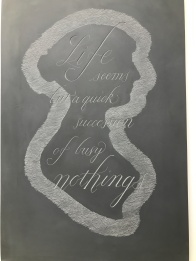 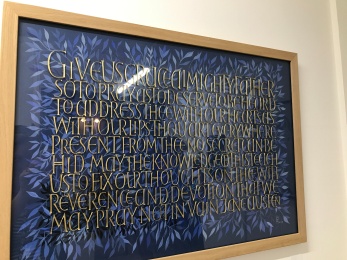 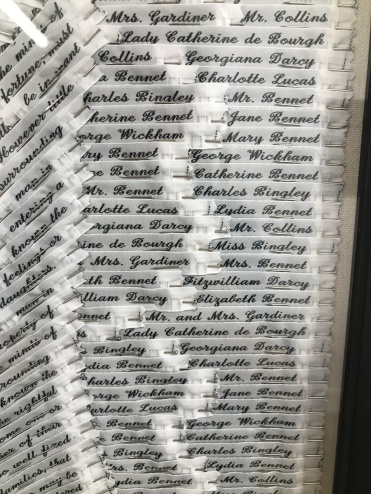 Funny story–I actually met the artist of the sculpture of JA at the writing table, but I didn’t meet him today at the cathedral. I met him a couple of days ago in Basingstoke at a mall when I was hunting for the JA Sitting with Jane book benches. More on that in another post. Anyhow, the artist is Robert Truscott, and his work is amazing.

Finally, I decided that it was time to leave and go have a rest. I thought about returning for the evensong honoring JA, but I didn’t have a ticket. Perhaps I could have snuck in. Maybe not. I heard that the cathedral would be packed, and I figured that I had already celebrated JA in my own way this morning. I will return to the cathedral before I leave Winchester, and maybe I’ll hold my own private service. 😉

I leave you with this image below because after a long, hot day (highs in the 80s here), the early evening’s weather changed into a thunderstorm with downpours of rain only minutes after the evensong ended. Coincidence? I think not. 😀 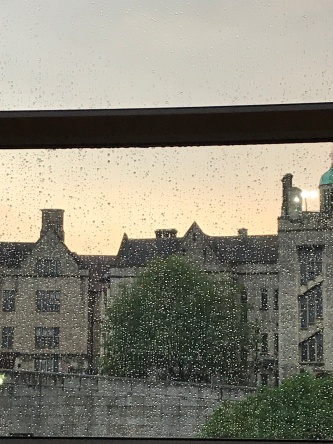 Perhaps Austen’s bicentenary can be linked back to Saint Swithun after all. I learned today of a proverb about Swithun and rain:

For forty days it will remain

St Swithun’s day if thou be fair

These words are written on a tomb that may or may not be his, but it is in Winchester Cathedral. St. Swithun’s Day was on July 15, FWIW, and today could be, or should be, called Jane Austen’s Day. July 18, 2017 was a day filled with warmth and plenty of sunlight, but it ended with a wonderful rain shower (replete with thunder and lightning) to say “goodnight, Jane.”