Welcome to a Day of Exhibits: “Jane’s Winchester: Malady and Medicine,” “The Mysterious Miss Austen,” and “Educating Boys and Girls in Jane Austen’s England 1775-1817.” Two of these exhibits were housed in one building: the Winchester Discovery Centre. The last can be found in the Winchester College treasury.

I will begin with the malady exhibit. While it focuses partly on Winchester, doctors and apothecaries, and the kinds of treatment used to attempt to cure the ill, a good portion of it focused exclusively on Austen’s illness and her attempts to find a doctor who could cure her. See the image below for an overview: 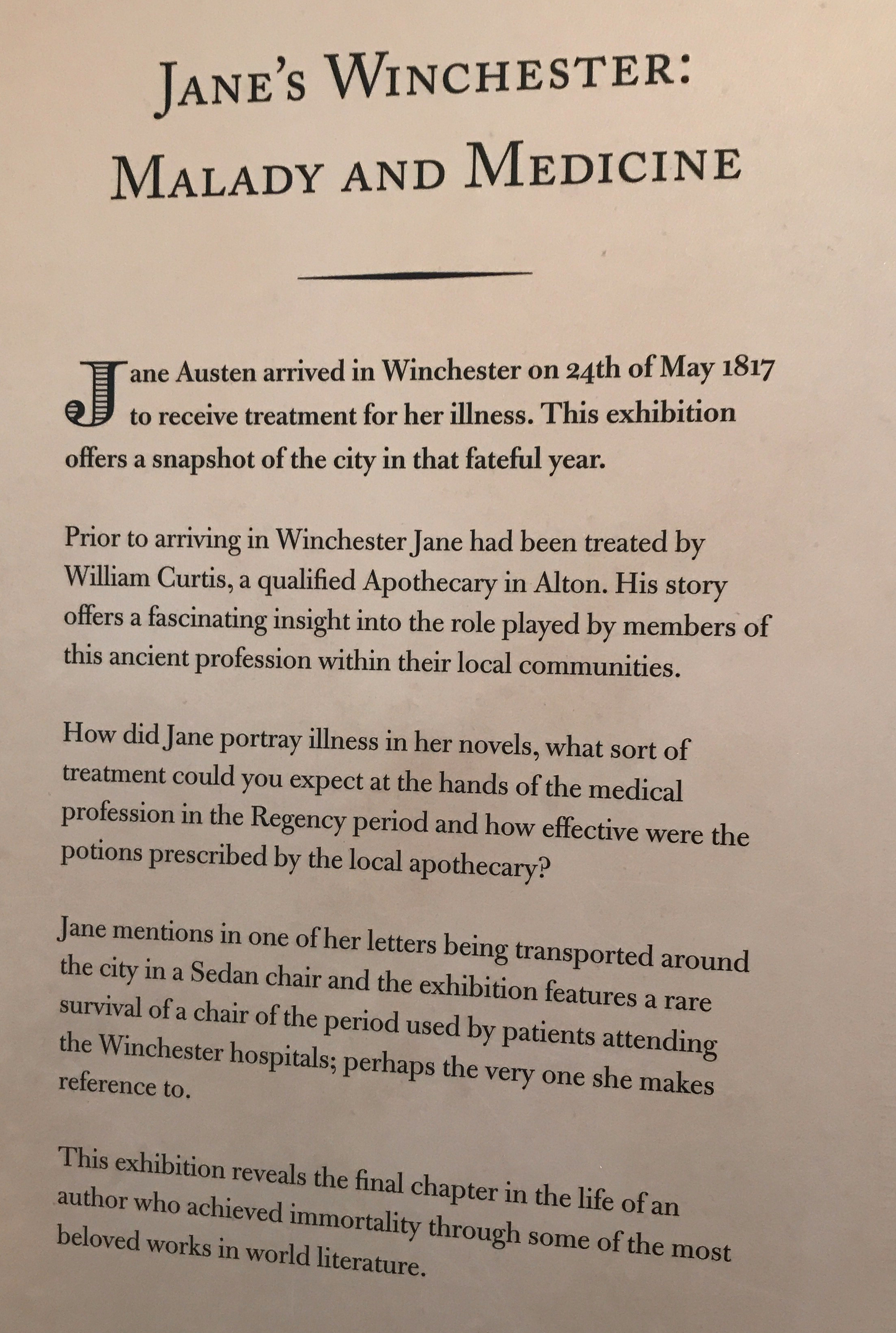 Any exhibit that describes archaic modes of treatment for arcane illnesses hits close to home for me not solely because of Austen (hint: personal experience). Yet thinking about what Austen endured in the last year of her life, particularly in the last four months, is a painful act. Her Alton doctor did everything he could think of to help, but out of desperation sent her on to someone else. The Winchester doctor, too, realized that he could not help Austen, either. In Winchester Austen knew that she would not recover from her mysterious illness.

What was wrong with her? That’s a question I get asked a lot at JAHM and CHL.

The exhibit makes its strongest case for #3. 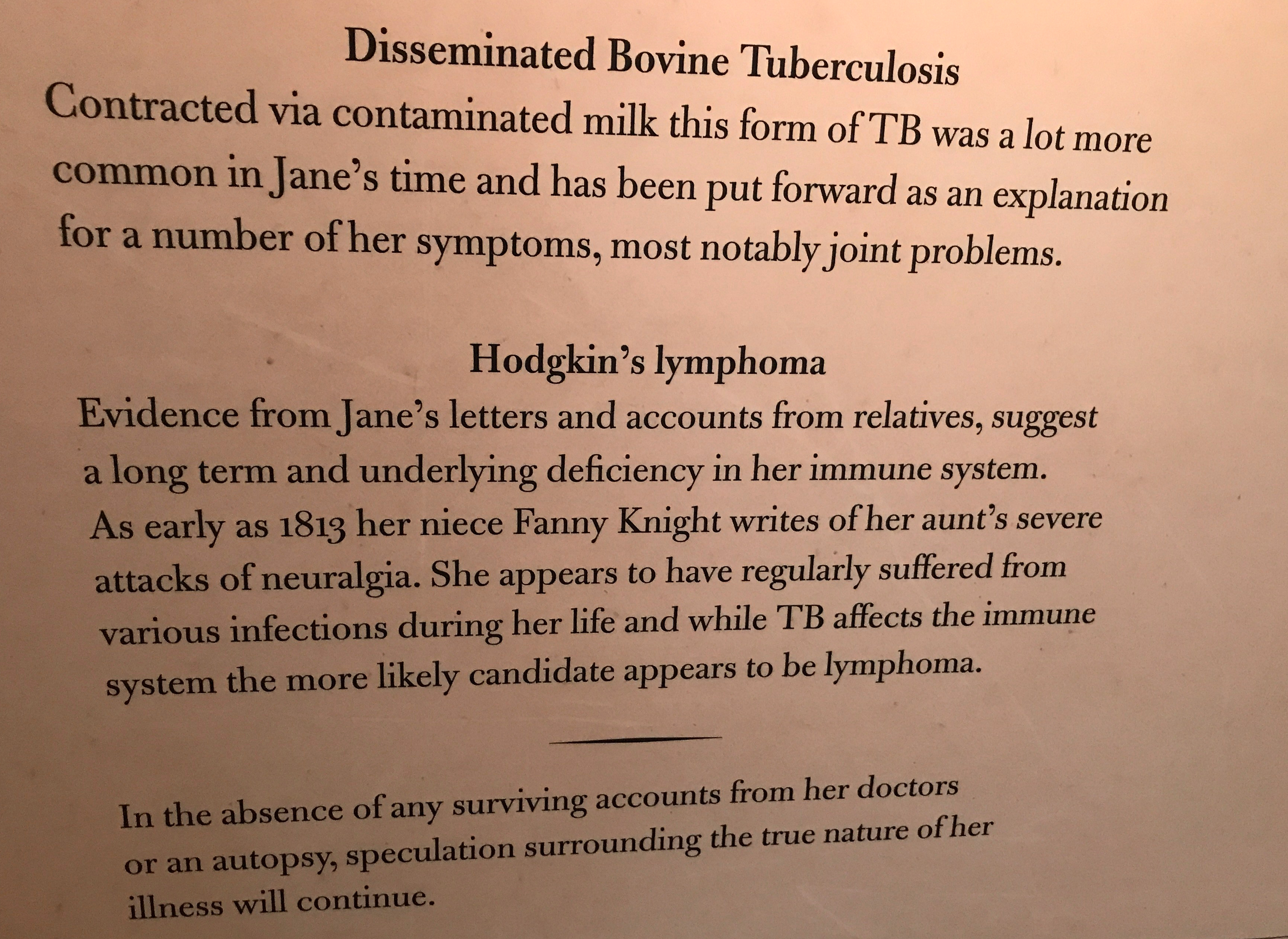 No one can know for sure, but whatever ailed Jane did not seem to affect the lifespan of her family–she was the first of eight siblings to pass away, and most of her siblings lived very long lives.

After visiting this somber exhibit, I made my way to the reason I visited the Discovery Centre in the first place. I came to see “The Mysterious Miss Austen.” Indeed, it cheered me up immediately! I was like a kid in a candy shop. 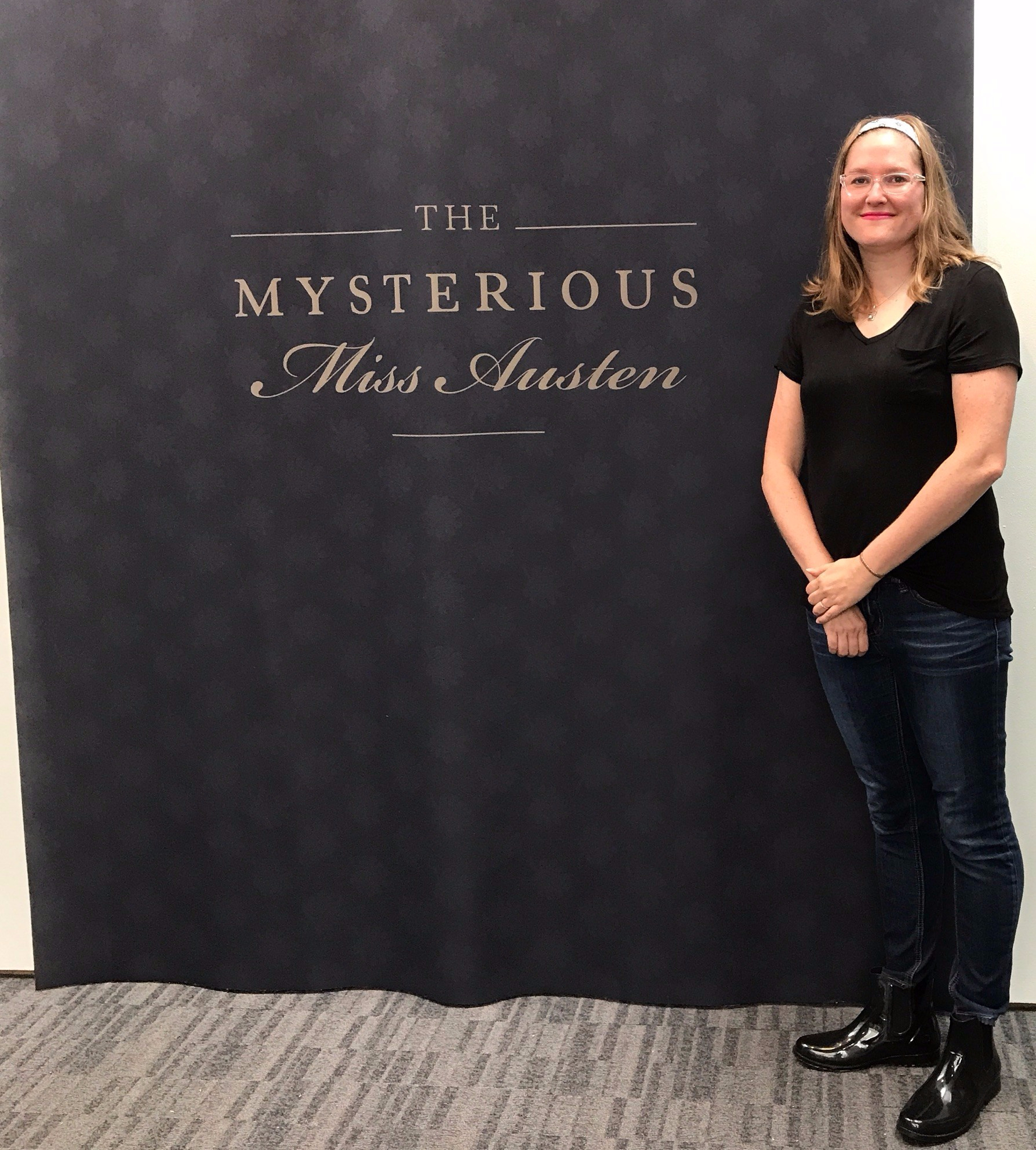 Like the Oxford exhibit, this was another no photos allowed exhibit. Double boo! Again, they couldn’t stop me from taking a pic outside the exhibit.

I gotta say it: this exhibit included a lot of great stuff that would please even an Austen novice. Here are the highlights:

This was one of the best exhibits on JA that I have seen. I didn’t want to leave. I actually left and then went back in just to say bye one more time to “The History of England” and the pictures of Jane. It was magical rather than mysterious.

Upon leaving this exhibit, Adam and I joined my friend and fellow JA aficionado, Jodi, for lunch at the Wykeham Arms. There we are below post lunch.

After this, Adam and I had planned to tour Winchester College, but the rain began to fall, so I decided to go indoors to the Winchester College treasury to see my third exhibit of the day on boys’ and girls’ education in Austen’s time.

This topic is part of my book project, so I took a keen interest in what the exhibit had to teach me. I was really pleased to learn that George Austen (Knight) went to school at Winchester College and that he was a good cricket player. I also enjoyed seeing a copy of Oliver Goldsmith’s History of England, as well as one of JA’s charades copied out and a book with Caroline Austen’s name inscribed in it. I got a kick out of learning that at one point in its history the boys at school rioted and held a school keeper hostage and that boys wrote marginalia in the books. I did take pictures of this exhibit. 🙂 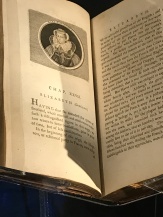 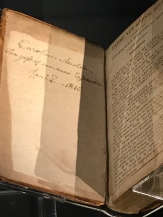 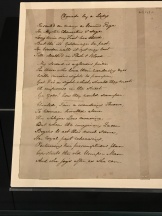 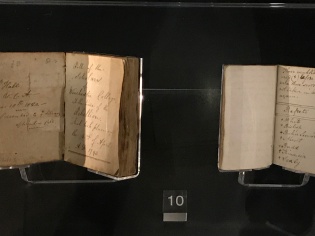 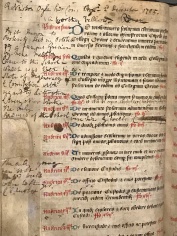 What a day spent gazing upon relics and thinking about Austen–yes, it’s what I am here in England to do! How fortunate am I? Extremely fortunate. 🙂