Yesterday we visited Brighton. You wouldn’t know it from this image, but this is not an Eastern palace situated in some far off clime. Oh, no. It is a British palace located in the heart of downtown Brighton. The Royal Pavilion was commissioned by the Prince Regent, George, who would become King George IV. The inspiration for this palace was oriental exoticism (Indian on the structure’s outside and Chinese on the inside), pleasure, opulence, and the sea (Brighton is a seaside town). I could tell you the story of George and his Xanadu-like pleasure dome, but I will defer to the Royal Pavilion’s website for that:

Brighton suited George who was a vain and extravagant man with a passion for fashion, the arts, architecture and good living. He rebelled against his strict upbringing and threw himself into a life of drinking, womanising and gambling.

This decadent lifestyle combined with his love of architecture and the fine and decorative arts – his residences in London and Windsor were like immaculate sets to show off his superb collections – resulted in his incurring heavy personal debts.

In 1787, after much pleading and many promises by the Prince of Wales, the House of Commons agreed to clear his debts and increase his income.

George hired architect Henry Holland to transform his Brighton lodging house into a modest villa which became known as the Marine Pavilion. With his love of visual arts and fascination with the mythical orient, George set about lavishly furnishing and decorating his seaside home. He especially chose Chinese export furniture and objects, and hand-painted Chinese wallpapers.

In 1808 the new stable complex was completed with an impressive lead and glass-domed roof, providing stabling for 62 horses.

In 1811 George was sworn in as Prince Regent because his father, George III, had been deemed incapable of acting as monarch.

At that time the Marine Pavilion was a modest building in size, not suitable for the large social events and entertaining that George loved to host.

In 1815, George commissioned John Nash to begin the transformation from modest villa into the magnificent oriental palace that we see today.

Interestingly enough, this “magnificent oriental palace” was based on drawings, paintings, sculptures, and stories about “the Orient.” George had not traveled there. He wanted to create a fantasy world for himself and his guests, whom he certainly set out to impress. A steward told us some funny stories about items in the house, including bobbing head Asian figure statues and wood and cast iron painted to look like bamboo. Let us not forget a chandelier and a dragon that each weight a ton, as well as a mosaic portrait of the monarch that also weighs a ton!

Because the Pavilion signs ask visitors not to take photos inside, I will show you some stock images from the internet that will give you a sense of the interior.

The most amazing space is the banqueting hall, which includes a dragon that shouldn’t have wings (Chinese dragons don’t) but does, and that 30-foot tall chandelier!

Other rooms include colorful faux Chinese design, too, and one even includes palm trees (which make absolutely no sense). 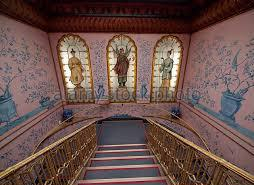 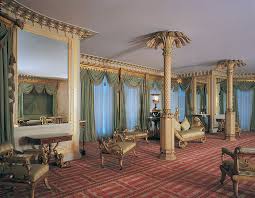 This palace is utterly ridiculous, but gorgeous. George III was known for his madness, but it seems like the prince had a different kind of craziness! What a bizarre palace!

The last stop on the self tour is that of the “Jane Austen by the Sea” exhibit. It seems an odd placement, and I heard a lot of visitors saying ,”What’s this doing here?” but in some respect it makes sense.

The exhibit is a part of the Austen bicentenary and includes copies of Sanditon (the manuscript of Austen’s incomplete sea-side novel) and Emma, which Austen through a twist of the arm dedicated to the Prince Regent because he loved JA’s novels. 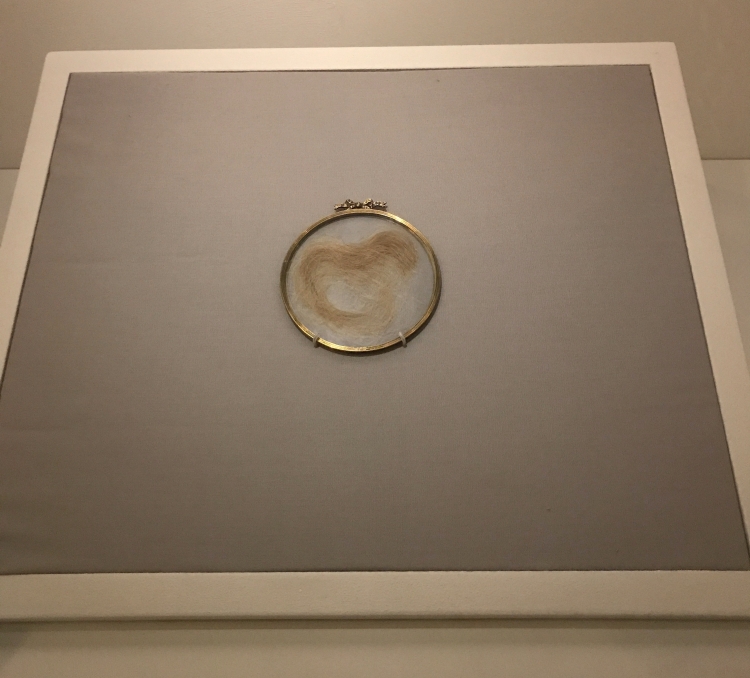 The exhibit includes a lock of Austen’s hair, as well as some other items related to establishing Brighton as a thriving early 19th-century sea-side town. The exhibit is adorned with pictures and quotations from scenes from Austen’s novels pertaining to the sea. Imagine Lydia Bennet’s gabbing about going to Brighton or passages from Persuasion.

While I would love to say that I had a peaceful, relaxing visit to Brighton, I did not. It so happened that the day we visited Brighton the town was full of people partying in the streets in honor of the pride festival. People were literally standing on the sidewalks and in the streets, and a lot of them had been drinking excessively (and it was only 3 p.m.) Streets were closed off, as was the Royal Pavilion’s gardens, which I really wanted to see, but the festival was actually happening right outside the Pavilion and on the promenade! The festival lasted all weekend, so I can only imagine what Brighton looks like right now!